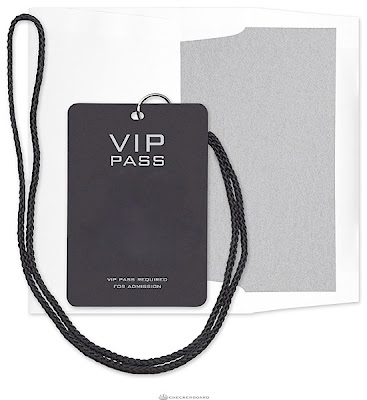 I recently received an invitation to an exclusive event. I thought the invites were kinda creative. They were in the form of VIP Passes. I couldn't help but think:
"Who wouldn't want to be a guest at this party? If the invitations are like this, who knows what's in store for the evening."
It always fascinates me how some people go to great lengths to be given VIP (very important person) status. What is more amazing is how many feel like outsiders if they aren't included in the "VIP" clique.
From the inception you have to know that you are important even when other's don't recognize it.
I remember NOT being invited to this BIG shindig. It seemed as though everybody else was "in the house" but me- I was disappointed to say the least. At that time in my life, I allowed my emotions to convince me that EVERY-body but me was at the event. (Why do we make comments like this? If EVERY-body was there I would have been there too- DUH.)
Why do we allow ourselves to get in such a twist about feeling left out? Don't!! It took me some time but I eventually realized that I prefer being celebrated NOT tolerated. In other words, none of us should consider ourselves less important because we're not on somebody else's VIP list.
Living in D.C. you run into a lot of people who think they're muckety-mucks. I was hanging out with a good friend who told me, "I wish I was going to that party. All the VIPs are going to be at this reception."
My reply to him was, "Well, I know my name is not on the list because I'm not a VIP. I'm an EIP and you need top security clearance to get EIP status!!"
After pausing for a few seconds with bewilderment plastered all over his face he asked, "What in the world is EIP?"
I stared at him and said with a matter-of-fact tone, "EXTREMELY Important Person!!" We both burst into laughter and went on with the evening enjoying our time together.
Just know whether your friends tell you or not, I think you're an EIP!!!
Make this the BEST week of your life!
Posted by Dr. Jeri at 5:00 PM 1 comment: